I've been working away at quilting my Under the Stars quilt (sort of). It's not going quite as fast as I'd like - I think because it's been a bit tricky to quilt with the walking foot because it is so thick that it doesn't feed quite right.

The weather is warming up so I want to get it finished - I likely won't use it until next winter. And I refuse to start my next quilt, which I really want to get going on , before this one is finished.

So far, there is a grid quilted in all the squares and the stars are outlined. I free-motioned around the applique snowmen and did a loop-de-loop in the sky. In the green I want to do snowflakes (in grey) with swirly connectors between them - not too heavy quilting, but enough that it holds together nicely. 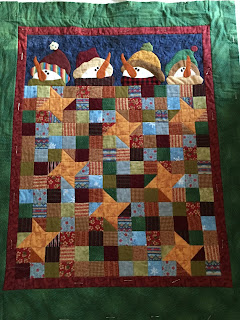 The light is really bad - but I'm not complaining, because it's pouring in through my sliding glass doors into the kitchen.
Posted by Anita at 20:37 No comments: