It's been another hectic week - I think I spent most of this week recovering from last week. My well was a running on empty by the end of this past week but feels recharged now.
I got two Dear Jane blocks finished:


And I did a little knitting. A friend at school is having a baby boy - instead of buying an outfit I decided to knit two little hats. This is the first one: 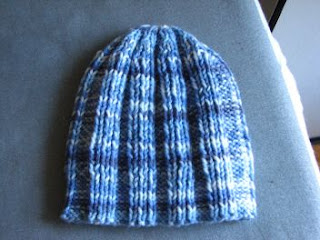 The second will be in green tones and will be a different style - the other is called a "tea bag helmet" - I'll leave that up to your imagination!