The Problem With Borders

On my last post I showed you the progress on my Metro Rings quilt. Everything went great until I put on the borders - it was great then too, until I tried to baste it for quilting. 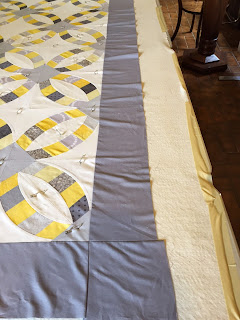 See those ripples in the border - not good! Not supposed to be there! I don't know what happened - I measured the quilt and the borders and sewed them on - everything I was supposed to do to get flat borders. (And if you think you know what the problem might be, please let me know. I sewed the borders on with a 1/4 foot instead of a walking foot - but that shouldn't have made it this bad. I'm wondering if I measured incorrectly somewhere.)

I was not happy. And I was pin basting it in a church, when the senior group was meeting, so no foul language allowed. I texted my quilty friends right away - they were consoling, offered some suggestions, and wished me luck. I googled to see what others suggested - to no great help though.

I emailed the quilting guru who thinks it's weird and I asked another expert. The consensus is to remove the borders, quilt the middle part, then put the borders back on. So, that's what I'm doing. And hoping for the best. 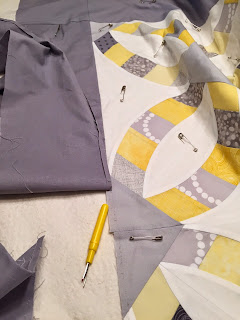 I only removed 3 borders for now. I pin basted the quilt - a first for me (and it went pretty well) and I sprayed one border to see if I could coax it to lay flat. No such luck. So I left the sprayed border on to avoid dealing with the stickiness of the spray. I'll take it off later.

I started quilting tonight. This quilt is a beast. The finished size will be 86" x 86" and right now it's about 96" x 96". My sewing machine isn't that big. It's a bit of a struggle to maneuver this thing under my needle - and I started in the middle to keep the wrinkles to a minimum. 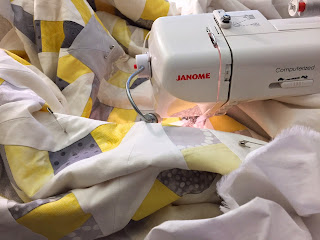 At least my cat hasn't tried to jump onto the sewing table yet.